We’re excited and honored to announce that we’ve been selected as a beneficiary of the 2017 Cabaret Series in Provincetown, MA this summer at The Crown & Anchor’s Paramount Theatre, Cabaret Room, and Town Hall Auditorium.

“The 2017 season is especially exciting because we’re bringing back some of our most acclaimed artists as well as offering fresh names who are quickly becoming Provincetown favorites,” Murray said. “The Crown & Anchor’s ongoing commitment is to present diverse and exciting full concerts by America’s most acclaimed performers at Provincetown’s premier venues with first-rate production values.”

Tickets are now on sale both for general admission seating and special VIP packages. Pricing and additional information available online at www.onlyatthecrown.com, by phone at 508-487-1430, or at the Crown & Anchor box office, 247 Commercial Street, Provincetown, MA.

When he’s not working at the True Colors Fund, you can find Nick somewhere in Brooklyn, listening to, making, or talking about music. 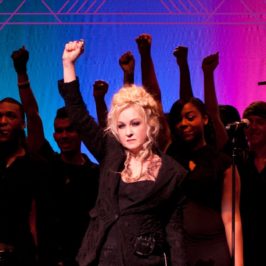 The Trump Administration just said it’s okay for homelessness services to discriminate based on sexual... Tuesday, December 10 | The NOVO at L.A. Live True Colors United and our co-founder...

True Colors United’s Statement on the White House report, “The State of Homelessness in America.”... That's a wrap! Here's what happened at the 2019 Impact Summit. This year’s theme, UNITY... Meet Osimiri Sprowal: The 2019 True Colors Innovation Fellow. “Maybe I have a cane, because...