Yesterday, the U.S. Department of Housing and Urban Development (HUD) announced a proposed change to the Equal Access Rule. This would undermine protections for transgender people seeking safe shelter. Such protections have existed for years in over 20 states and over 300 cities and counties across the country—in some cases for decades.

The Equal Access Rule protects transgender people from discrimination in homeless shelters by ensuring that people can access HUD-funded shelter consistent with their gender identity – rather than just their sex-assigned-at-birth. HUD’s proposed change would allow homeless service providers to consider “privacy, safety, practical concerns, and religious beliefs” when making a determination about if and how to house people seeking services. In a nutshell, this proposed change would give providers a pass to discriminate based on a person’s sexual orientation or gender identity.

Preserving and enforcing the Equal Access Rule is critical to the safety of transgender people in need of shelter.

Our work and research has shown that housing transgender people according to their gender identity does not pose a safety issue to others. In 2016, over 300 domestic violence and sexual violence organizations nationwide signed a National Consensus Statement. They agree: it is appropriate to serve transgender women victims alongside other women, and not a safety issue. On the other hand, failing to house transgender folks appropriately does puts transgender people in danger. According to the US Trans Survey, over half of transgender survey respondents who stayed in a shelter in the past year were verbally harassed, physical attacked, and/or sexually assaulted because of their gender identity.

As it stands, transgender folks are already vastly overrepresented within the homelessness population. According to the Department of Health and Human Services, 6.8% of youth experiencing homelessness are transgender. According to our own research, this is often due to factors such as family rejection, poverty, and lack of resources. This proposed change will only exacerbate these factors, causing transgender folks – particularly young people – to face more discrimination and barriers when seeking help. We cannot let that happen.

True Colors United is doing everything in our power to support and protect transgender youth. Click here to stay up to date on this effort and more. True Colors United and a number of homelessness and LGBTQ organizations have released a joint statement denouncing this proposed change, which you can read in full below:

Washington, D.C. — Yesterday, in his testimony to the House Financial Services Committee,  Housing and Urban Development Secretary Ben Carson was asked about the agency’s implementation and enforcement of the Equal Access Rule, which provides sexual orientation and gender identity discrimination protections in housing and shelter services. He lied, misled, or at the very least didn’t know what his own agency was up to.

Carson’s Fiction: “If you want to include [sexual orientation and gender identity] as one of the protected classes I think that is something Congress will be responsible for.”

Weakening the Equal Access Rule and its enforcement mechanisms is unacceptable. Access to housing – to shelter – is a basic, fundamental necessity. LGBTQ youth are more than twice as likely to experience homelessness than their non-LGBTQ peers, and Black LGBTQ youth have the highest rates of youth homelessness. One in five transgender people will experience homelessness in their lifetime. It is unconscionable that HUD would initiate policy changes that will lead to higher rates of homelessness. The Equal Access Rule and related guidance was designed to give service providers the information they need to serve transgender people well. The rules are meant to provide a modicum of protection for LGBTQ people at their most vulnerable.  We cannot allow this Administration to weaken those protections.

“I am not surprised that the Trump administration would make changes to HUD rules that would make it more difficult for LGBTQ people to access homelessness services,” said Kierra Johnson, Deputy Executive Director of the National LGBTQ Task Force. “They are continuing a hateful trend. Safe housing is a human right and ending homelessness is an important goal. I know that even though the Administration wants to turn its back on us, millions of people, including housing and homelessness service providers will continue to ensure that LGBTQ people, people of color, and immigrants still have access to shelter.  As these rules are released, we call on our communities to stay united and fight back.”

“A safe place to call home and accessible shelter when home may not be an option are basic rights that should be available to everyone, regardless of sexual orientation or gender identity,” said Laura Durso, Vice President, LGBT Research and Communications Project, Center for American Progress. “It is shameful that Ben Carson either lied to Congress or has no clue what his agency does. Either way, he is continuing the Trump administration’s trend of ignoring the law and trying to undermine the civil rights of transgender people. Carson must be held accountable for these actions, which weaken civil rights and enforcement and will only worsen the health and security of transgender people nationwide.”

“Secretary Carson is compounding his lack of awareness about how his department works with a stunning dose of cruelty,” said Vanita Gupta, president and CEO of The Leadership Conference on Civil and Human Rights. “The Equal Access Shelter Rule protects transgender people from discrimination, and the courts have consistently ruled that gender identity and sexual orientation are covered under the Fair Housing Act. With one in five transgender people having experienced homelessness at some point in their lives, shelters, particularly those receiving taxpayer funding, should not have a license to discriminate against LGBTQ people during their time of need.”

“This administration has established an undeniable and clear pattern of disdain for LGBTQ people. This forthcoming proposed rule is another assault on these communities,” said Lisa Rice, President and CEO of the National Fair Housing Alliance. “HUD is gutting a critical rule meant to protect access to shelters for transgender and other LGBTQ people at a time when they are at their most vulnerable. HUD’s actions will undoubtedly cause more homelessness among LGBTQ people. This is beyond unacceptable. The fair housing movement will do all we can to fight this move and hold HUD accountable.”

“This is not about keeping anyone safer,” Robin Maril, HRC Associate Legal Director. “Transgender people, particularly Black trans women, are more at grave risk of violence and discrimination, including when accessing emergency shelter. This proposal is a step backwards from existing regulations, stripping essential protections from some of the most vulnerable people in our community when they need them the most. No one should be turned away from shelter or required to sacrifice their safety to get the services they need, especially when those services are funded by the U.S. taxpayer. More trans people, especially young trans women of color, will be forced back on the streets where they will face an increased risk of violent crimes, including death. This is an unconscionable attack that will only put more lives at risk.”

“This is a heartless attack on some of the most vulnerable people in our society,” said Mara Keisling, Executive Director of the National Center for Transgender Equality. “The programs impacted by this rule are life-saving for transgender people, particularly youth rejected by their families, and a lack of stable housing fuels the violence and abuse that takes the lives of many transgender people of color across the country. Secretary Carson’s actions are contrary to the mission of his Department and yet another example of tragic cruelty of this administration.”

“In America, approximately 7 percent of youth experiencing homelessness identify as transgender, while transgender youth make up 0.7 percent of the general youth population,” said Gregory Lewis, Executive Director & CEO of Cyndi Lauper’s True Colors United. “Every young person has a human right to housing that is safe, welcoming, and inclusive of their needs. This is especially true for transgender youth, who are one of the most highly impacted groups of young people facing homelessness in this country. It is unacceptable and inhumane for this administration to add further barriers for transgender youth to get the help they need and deserve. And for Secretary Carson to mislead Congress the day before launching an effort to alter the Equal Access Rule demonstrates this administration’s disregard for the safety of the most vulnerable amongst the 4.2 million youth who experience homelessness each year.”

“The Trump administration should be ashamed of its effort to erode the Equal Access Rule, which simply ensures that all people — regardless of who they are and whom they love — have equal access to housing,” said SAGE CEO Michael Adams. “As we approach the 50th anniversary of the Stonewall uprising, we are reminded that LGBT elders know all too well what it’s like to face discrimination in housing and in every facet of their lives.”

“HUD’s notice containing its forthcoming agenda on housing programs is disingenuous, a backdoor invitation to allow shelters to discriminate, and dangerous,” said Sunu P. Chandy, Legal Director of the National Women’s Law Center. “On one hand, the notice states that entities are open to all regardless of sexual orientation and gender identity. On the other, it states that – when it comes to federally funded housing including emergency shelters – a person’s outdated identification documents, or someone else’s religious views, can dictate a person’s sex. The National Women’s Law Center calls on federal agencies to maintain transgender inclusive policies and procedures in line with existing federal protections against sex discrimination to help ensure the safety of all women, including women in the LGBTQ community.”

“At a time when we are working hard to ensure everyone who needs it has access to housing, HUD is proposing a rule change that will weaken Fair Housing rights, and result in nothing less than discrimination against people who have historically been treated unfairly and shut out,” said Deborah De Santis, President and CEO of CSH. “We are particularly concerned about the impact this will have on our youth identifying as LGBTQ, who will undoubtedly see this as another attempt to take away the opportunities they have for securing a safe space and better futures.”

“If we ever intend to fully address the housing crisis in America we need to address the needs of those who are most disproportionately impacted by the experience of homelessness,” said Marc Dones, Executive Director of the National Innovation Service. “At a time when communities across the country are beginning to see success in addressing the homelessness crisis by using data driven strategies that focus on those with the highest need it is deeply disappointing that the Trump Administration would undermine those efforts with policy that is contrary to our best research and indeed the ideals of this nation.” 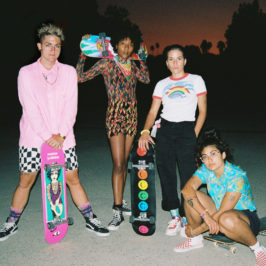 Tomorrow is Giving Tuesday – a day to support the causes that are important to...