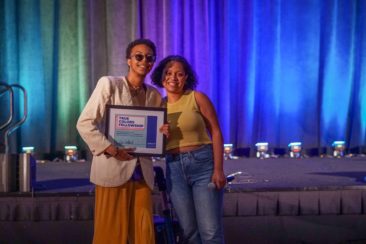 That's a wrap! Here's what happened at the 2019 Impact Summit.

This year’s theme, UNITY + ACTION = IMPACT, came to life in Washington, DC. Here are some highlights: Dominique Jackson taught us to "lead with kindness."

Dominique Jackson, star of FX's POSE, graced the Impact Summit stage for a conversation with our Senior Program Director Twiggy Pucci Garçon, who also works as a choreographer and writer on the show. POSE features the largest cast of transgender actors ever assembled in a scripted show, and in two seasons has already been nominated for two Golden Globes and three Emmys.

Twiggy and Dominique's conversation ranged from chosen family and how it relates to LGBTQ youth experiencing homelessness, to self empowerment and acceptance, to leadership. To many queer young people, Dominique is a beacon of light and resilience – someone who's been fiercely true to themselves, faced down adversity, and found success in her art. Our first-ever Experience Hall was a blast.

With two immersive workshops on voguing and runway, plus hands-on activations around our True Colors Learning Community and State Index on Youth Homelessness, participants had plenty of opportunity to unwind, have fun, and deepen their knowledge of the issue. The Opening Reception was sha-poppin. This year’s class of True Fellows spread their wings.

At the Impact Summit, 2019’s True Fellows graduated from their six-month Fellowship with skills that will bring their advocacy to the next level. We can’t wait to see what they’ll accomplish next!

We made our impact on Capitol Hill.

For the first time, we ended the Summit with a Hill Day where attendees met with elected officials from their state. Each group was equipped with resources and recommendations to educate their representatives on the steps they can take to end youth homelessness. Here are a few social media moments from the day:

We’re in DC with our friends from @BillWilsonCtr and @TrueColorsUnite today to advocate for funding for youth homelessness. We can do better! #TrueColorsImpact pic.twitter.com/id7TJ0Szxu Jasmine brings expertise in capacity building and strategic vision to the True Colors United Board....

President Biden’s first day had big consequences for our mission to end homelessness among LGBTQ...